Previous Next
Roth vs. Traditional IRA 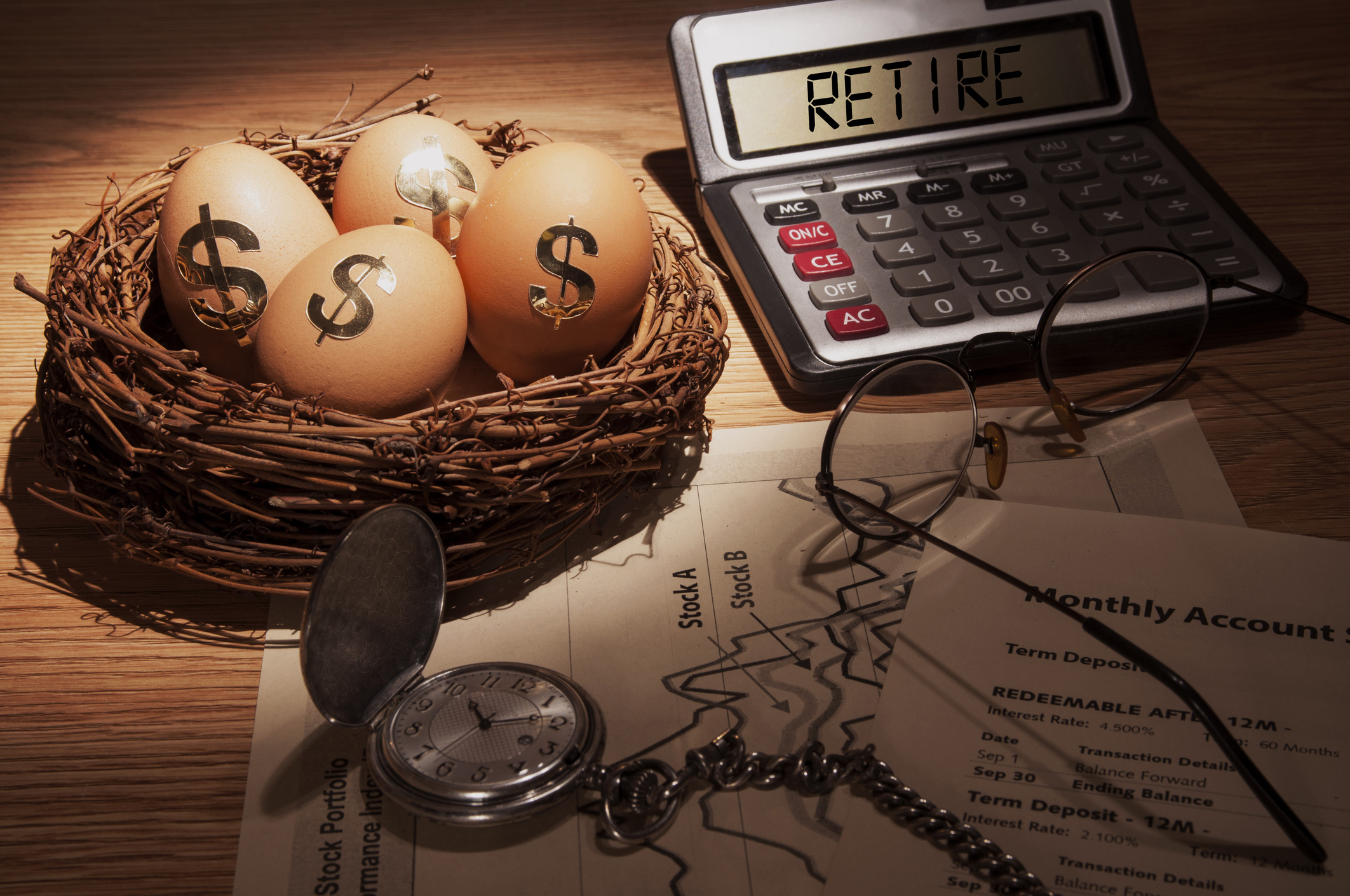 I know a woman named Jennifer, who thanks herself when she benefits today from something she did previously.  It might be as simple as having milk in the refrigerator because she stopped for a gallon the night before.  Retirees with Roth retirement accounts can also thank their past selves.  To answer the question of Roth vs. Traditional IRA, they chose to “bite the tax bullet”.  Now enjoy tax-free withdrawals.  It’s the same for retirees who converted a traditional account to a Roth.  (Their heirs will also inherit the tax-free accounts.)  Let’s take a look at the Roth vs. Traditional IRA.

“To Roth or not to Roth” is a question of when you want a tax break.  Contributing to a Roth account means you pay more taxes today, in exchange for lower taxes during retirement.  The same is true if you convert a traditional retirement account to a Roth.  However, a Roth only makes sense if you’ll be in a higher tax bracket when you retire.  After all, you want to take tax breaks when you face the biggest tax bills.

So, should you take a “tax hit” now to win your future self’s gratitude and affection?  The answer depends on whether you’re working or retired, and whether you have a Roth option at work.

Let’s start with some basics and differences between the IRA and employer-sponsored flavors of the Roth.  The following table is a summary, but make sure you understand the details before making a withdrawal.  This is especially important if you’re not yet age 59½. 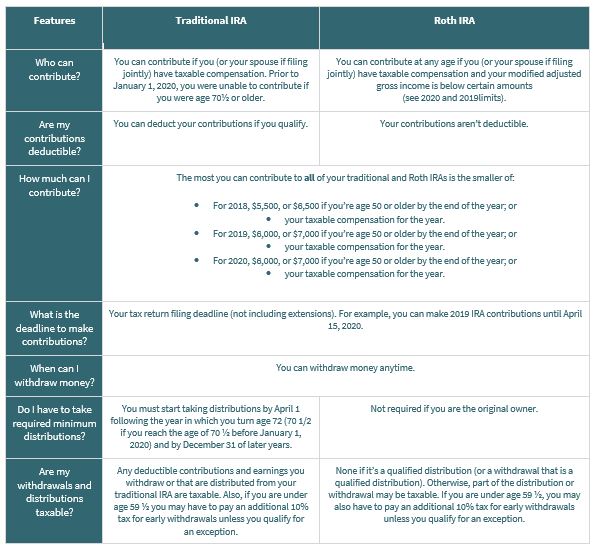 The decision of whether to Roth starts with comparing your tax rate today to what it could be in the future.  The latter might be hard to predict, But here are some guidelines:

Contemplating your current and future tax rate will get you pretty far in making the “Roth or Not” decision.  Here are some other factors to consider.

Choosing a Roth can lead to underappreciated tax costs!

Contributing to a traditional retirement plan or deductible traditional IRA reduces your adjusted gross income (AGI), but contributions to a Roth account do not. Your AGI is important because it can affect many other aspects of your tax bill.  (Including your eligibility for, and the size of, various deductions and credits.)  Because of this, it’s important to appreciate the total impact choosing the Roth over the traditional account (or converting to a Roth) has on your tax bill. Use an online tax calculator or speak with your accountant to understand all the moving parts.

You can make 72 meaningless.

You must begin taking required minimum distributions (RMDs) from traditional retirement accounts at age 72 (or wait a year and take two distributions). Also, you can’t contribute to a traditional IRA beyond that age. However, with IRAs you can contribute as long as you have earned income, and there are no RMDs.  Roth 401(k)s and 403(b)s are subject to RMDs if you’re no longer working for the company.  However, you can transfer those assets to a Roth IRA to make them RMD-free. Keeping money in tax-advantaged accounts for as long as possible is particularly beneficial for people who don’t need the money.  People who want to leave a large (income-tax-free!) inheritance to their heirs also find this beneficial.

Many of life’s big milestones can affect your tax bill.  So if you get married or divorced, experience the birth of a child, death of a spouse, or a job change, it’s probably time to reevaluate your Roth vs. Traditional IRA decision.

What would you do with the deduction or taxes owed

If you use an online calculator to decide between a traditional or Roth account, the calculation assumes you will invest the money you saved by choosing the traditional account and getting a tax deduction. However, if you instead want to use that money for other purposes, then the Roth might make sense even though an online tool tells you otherwise. Similarly, if you’re analyzing whether you should convert assets in a traditional account to a Roth, the calculator will probably assume that the taxes due as a result will have come from other investments. But if the money would have come from no-yielding cash or money that would have been spent in ways that don’t provide long-term value, paying taxes today in exchange for not paying taxes in the future may be a good “investment.”

Tip for parents: If you aren’t sure how much to save for retirement versus college and you’re in a high tax bracket, consider contributing to a traditional 401(k) and then contributing the tax savings to a 529 college savings plan.

Getting Money in a Roth, Even If You’re “Ineligible”

Anyone of any age can do a Roth conversion.  You don’t have to convert an entire traditional account, so consider converting portions over time.  Also, you don’t have to wait until you leave your employer to convert money in a traditional 401(k) to a Roth account.  If your employer allows an “in-plan conversion”, the only money you can’t convert is non-vested employer matches.  (Just keep in mind that you’ll still owe taxes on the amount converted.)

If you do a conversion that involves IRAs, you have until Oct. 15 of the following year to change your mind.  This is done through a process called recharacterization. Here’s an example:  Let’s say you convert $100,000 into a Roth, but the investments you bought subsequently drop 50%.  You’d have to add $100,000 to your taxable income for an account that’s now worth just $50,000.  To make things right, contact your account provider and initiate the recharacterization.  Once completed, it’s as if the initial conversion never happened.  Just remember that you can’t recharacterize in-plan conversions.

You also can’t recharacterize just portions of a conversion to one Roth account. But there’s a workaround if you plan ahead. You don’t have to convert to one account; you can create several converted accounts with different investments. That way, if one investment tanks, you can recharacterize that account while leaving the other converted accounts to grow on their merry, tax-free way.

Finally, because the conversion results in higher taxes, you should adjust any withholdings or quarterly payments to avoid underpayment penalties.

You can contribute to a non-deductible traditional IRA (when you meet certain requirements) and immediately convert it to a Roth.  If you don’t have pre-tax money in any other traditional IRA accounts, including SEPs, SIMPLEs, and rollovers from previous employers’ plans, you can immediately convert that traditional IRA to a Roth IRA.  Because you couldn’t deduct the contribution and the account didn’t have an opportunity to grow, you won’t owe any taxes on the conversion.  This little trick is known as the “backdoor Roth.”

There’s another all-in limit of $53,000, or 100% of compensation, whichever is higher. This includes employee and employer contributions.  If your account hasn’t reached that annual limit, you can make additional after-tax contributions.

An example: Let’s say you make a $25,000 after-tax contribution to your 401(k), and it grows to $100,000 over the years.  You leave your employer, and transfer the $75,000 of growth to a traditional IRA.  Then you convert the $25,000 contribution to a Roth IRA (which then grows tax-free like Roth’s everywhere).  If you had kept the $25,000 in a regular, taxable brokerage account, you’d pay taxes on gains, dividends, and interest attributable to those investments each and every year

Not every plan allows this; it’s up to your employer. But if available, it’s a great way to add more tax-advantaged assets to your portfolio if you can save more money beyond the $18,000/$24,000 annual limits and your income makes you ineligible for a Roth IRA.  Just remember the same early withdrawal penalty applies, so only contribute money you don’t need until you reach age 59½.

If you’re feeling a bit mixed up, that’s understandable.  Rules governing retirement accounts send even experts’ heads spinning.  Be careful whenever making decisions about your accounts.  (Especially when it comes to pre-59 ½ withdrawals and account rollovers.)  Triple-check your understanding of the ins and outs before doing anything.  A competent CPA is a good source of information, and  your account providers can explain specifics related to their company.  Take the time to educate yourself and get professional advice if needed.  Making choices that are right for you can result in thousands of dollars of after-tax wealth.  Your future self will love you for it.

Do you have a question about something you’ve read?  Why not ask?

Simply give us a call, send an email, or schedule your complimentary, no-obligation discussion today!